You can map a binding for an Attachment-delete yourself, though.

Thanks for bringing this to my attention - I usually use ykeys on my mac and sometimes forget about built in solutions...
the bindings "delete" and "reveal in finder" will work for me, thanks again!

I basically meant this:

when I am in notes and right click on an attachment I get this menu: 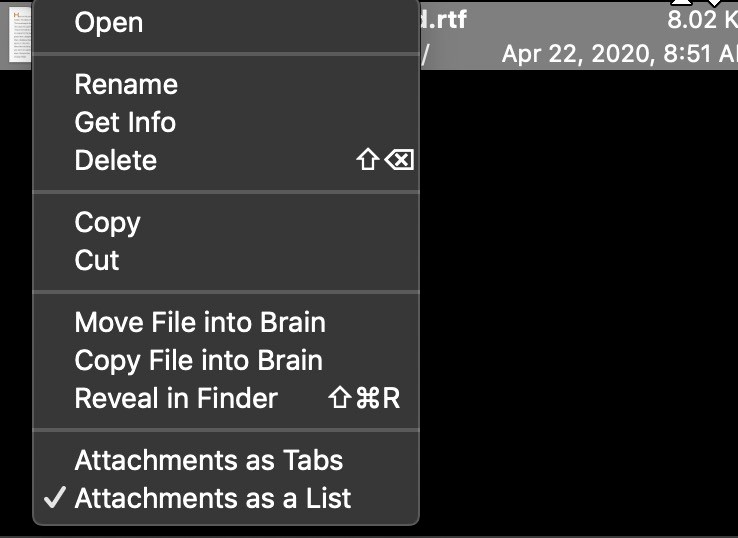 When I click on a thought, I get this menu: 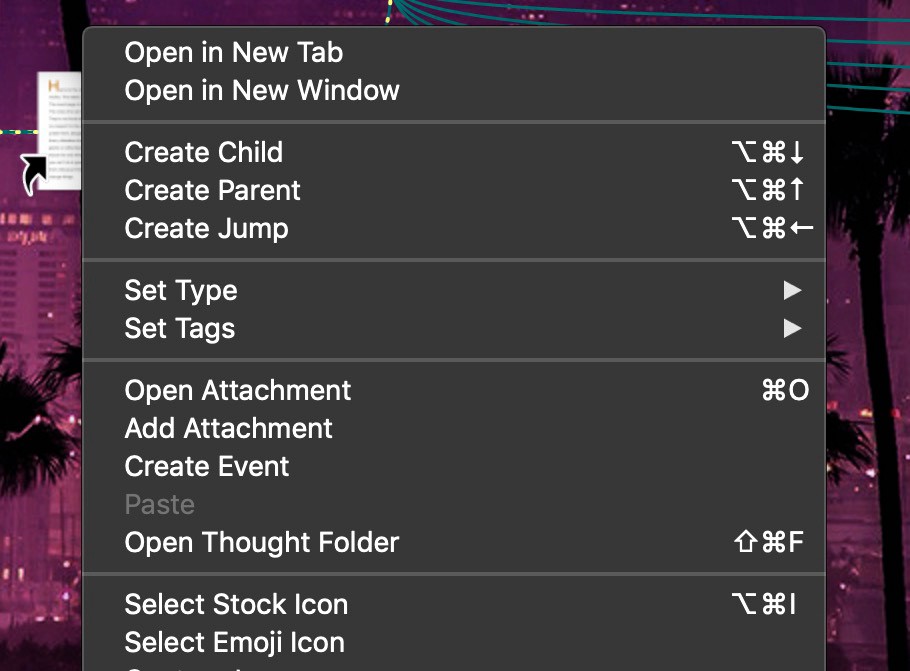 since I am already on a selected and enlarged icon, it would make sense to me
to have such additional options related to the attachment: 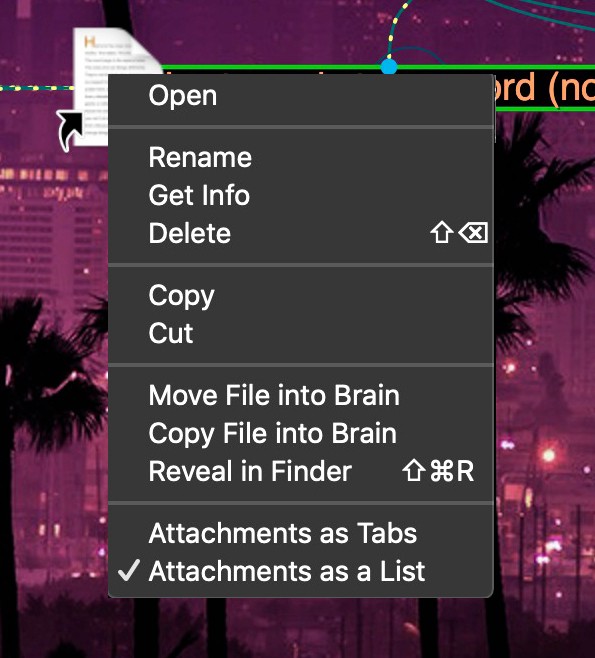 (I already applied your keyboard suggestion 😉)


Quote
tb_stubs 5 posts
tb_stubs 1598537613
A small addition: since those functions are already implemented in the notes editor they almost work with bindings on the main screen. E.g. if I activate "reveal in finder" in the notes editor it will work one time with the selected thought in the main screen, which gives a good impression how swiftly one could work with the attachment without using the notes editor...
Quote
peterB 91 posts
peterB 1598553388
@tb_stubs
Thank you for the suggestion! We're happy to consider such changes to make TheBrain smoother for you. How are you imagining this working if there are multiple attachments on a thought?
Quote
tb_stubs 5 posts
tb_stubs 1598601013
For multiple attachments I would consider if there are special menu options that could apply to multiple attachments, like "delete all attachments (which could then use the same delete shortcut)", "open all in finder", etc. If you click one level deeper in the list view, you have already implemented the function to manage the attachments with the usual menu from the notes editor...
If you display the list as tabs, you could delete the frontmost one, for example...
I think there are some intuitive and logical options to explore.
Quote
DavidGretzschel 1,454 posts
DavidGretzschel 1598618089

@tb_stubs
Hmm.... I'd like the context-menu key on the keyboard to open this menu: 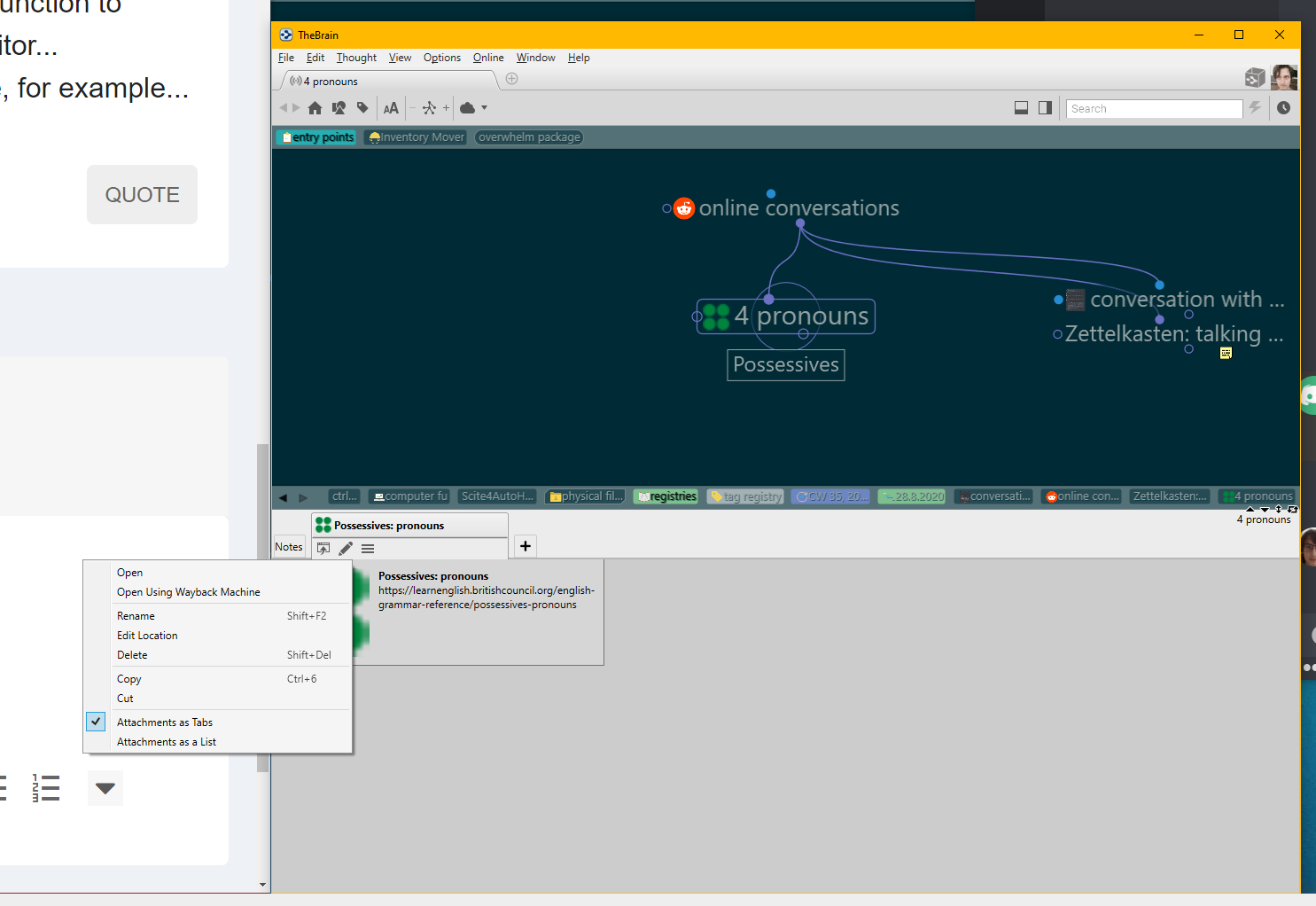 instead of the Thought-specific menu, which it does now.
But right-clicking the Thought on the Plex bringing up the Thought-menu, that actually makes sense to me.

You can get the Attachment-context menu by right-clicking anywhere into the greyspace, why should there be one more place on the Plex for this?

Though personally I'd never use the mouse anyway, if I don't absolutely have to.

You can get the Attachment-context menu by right-clicking anywhere into the greyspace, why should there be one more place on the Plex for this?

Though personally I'd never use the mouse anyway, if I don't absolutely have to.

I fully agree, I wouldn't use a mouse if I didn't have to...(this would change again when the extended view returns, because you think slightly different with the mouse in your hand and when you are arranging your thoughts) but I also want a maximum of space for the plex and the open note editor, only if you have to. If there was already a possibility to delete an attachment of a selected thought in the plex by keyboard input and to open an attachment in the finder as well, I would be quite satisfied.
The context menu would of course be something for people who prefer to work with the mouse.
Quote
peterB 91 posts
peterB 1598640500
Thanks @tb_stubs, I've submitted the feature request to our engineers. We'll look into implementing some version of this and let you know if/when we do.

@tb_stubs
Yeah, extended view would probably be a good use for the mouse.
Though I'd really like the ability to quickly move stuff around with ctrl+arrow for smaller lists.

On a Windows-keyboard (is that a word?) there's a dedicated button for it.
I use that for accessing less often used functionality like "duplicate Thought",
which isn't worth having a keybinding for, but is convenient to access via context,
arrow keys and then enter.

If I could only highlight a link, I could use that key to do most of what I'd want with link types.
[like actually using them]

Isn't there a context-menu/Apps-key on a Mac keyboard?
Maybe that could work for you as well. (the Apps-key opening the Attachment context, when Plex is not focussed, I mean)

"Show in Explorer" would be "Show in Finder" (I think)
Anything you see in a dialog like this can be mapped. 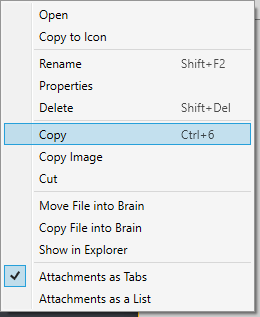