This category is not accepting new topics or replies.
163 posts Underdog 163 posts
Spacenexus 1,167 posts
Spacenexus 1283699941
I can see the snooze and dismiss buttons are definately inactive in this example of a single reminder, even when the thought is highlighted. Technically, using snooze all or dismiss all would suffice for a single reminder but logically the snooze all and dismiss all should be ghosted and the single dismiss and snooze active.

I'm still waiting to re-observe the single dismiss and snooze buttons being inactive with multiple reminders with one of those highlighted.

So far there are two issues of design logic that require tweaking, above and the one in my previous post. 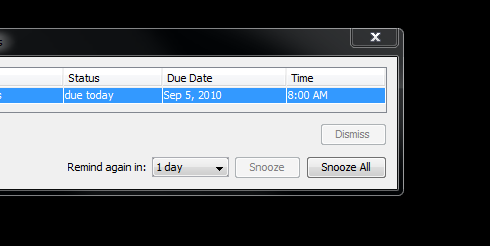 
Quote
Underdog 163 posts
Underdog 1283783992
With 6.0.4.0 I was able to reproduce this issue in connection with Transparent Mode.
Reproduction steps:
1. (Re)Start PB and allow reminder window to appear (if necessary, set at least 2 events with due dates and times within, say, 2 minutes). If you click on any single event, the Snooze Button will be activated as expected (top screenshot). Feel free to snooze the events, either one by one or with Snooze All, or just go to the next step.
2. Switch to Transparent Mode, wait 30 seconds (just to be sure), switch back to Float Mode and wait for reminder window to appear (or force it by changing the system time). When clicking on an event, the Snooze Button remains inactive. (bottom screenshot)

Also spotted another inconsistancy as now with a single reminder the single dismiss and snooze buttons are highlighted. This happens to be a repeating task if that helps.

"Put the kettle on Gromit, I sense the day is going to hold even more adventure, lad!" 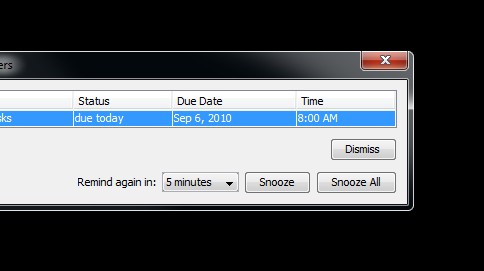 
Quote
Moe 1,906 posts
Moe 1283885301
@underdog, Thank You for keeping an eye out and posting the series of steps which leads to the undesirable outcome. Our engineers have been notified accordingly. We will have a fix to this in a future update of PB.

@spacenexus, Thank You for your comments and feedback. You certainly make some good points. I will pass your feedback over to our development team now.